Dec 2011 – Jan 2012
Deirdre is happy to have had her short-short story “1966 and All That” re-published in issue 11 of the Ballon-Rathoe Chronicle (homeplace history magazine). The original story was broadcast on BBC Radio Nottingham on Patrick’s Day 2006. It’s in our 2006 Archives, if you want to read it.

February
We marked Feb 1, St Brigid’s Day, with a talk about Irish women & fiction @ Derby High School. Wonderful audience of bright, articulate young women.
Tue 7 Feb: Over to Birmingham for an advice session on Díon funding. Good to learn that Federation of Irish Societies had heard favourable reports of our group’s activities.
We got our newsletter out in time for March Irish festival.

March
Sat 3 March: One-day course on Irish fiction @ Leicester Adult Education Centre. This was a very enjoyable day. Met some new people, and one person had come from Birmingham.
Thurs 8: Pat Murphy’s talk on Michael Collins went very well, with lots of new interest from people we hadn’t met before. Suggestions for future events included a revival of the Irish Book Group, and a talk on the history of hurling.
Fri  9: The Eavan Boland workshop in the library was well attended too – and one person came all the way from Birmingham (not the same person who came to the Leics study day). We’ll advertise our future events on the Irish in Birmingham facebook page.

Deirdre’s article, ‘The Way to the Past’, on Boland’s Famine poetry, is now available in Five Leaves journal: Maps, edited by Ross Bradshaw: ISBN9781907869242. Orders here.

16 March: Return visit to Philip Neri School for a storytelling session with the children. We had a lovely time there in 2011, and this year was equally enjoyable. Lots of children remembered last year’s stories, which was great. It was an early morning, though, with a 7am slot on BBC Radio Nottingham: presenter Andy wanted a few Irish phrases for Patrick’s Day.

17 MARCH: ST PATRICK’S DAY:
Another return invitation: back at States of Independence book fair at Leicester, this time to talk about Irish short stories. The 2012 fair fell on Patrick’s Day, so it was a good day to highlight Irish writing and publishing. Good audience – lots of interesting questions and positive feedback. Info: http://www.statesofindependence.co.uk.

A very busy day: two storytelling sessions at City Art Gallery, with lively audience participation from the children – and the Council House bell tolled at exactly the right moment in the story of the Children of Lir – magic!
Never thought we’d actually tell people we appeared in one of  Murdoch’s rags, but we got listed in The Sun’s  Top 10 Pat’s Day events. We’re at no.10 (they say the list is “In no particular order“), and our event is described as “a perfect afternoon for the whole family”.

We had a good Irish language session. However, it was a shame that some people couldn’t find us as the Irish Centre was packed, and there was some confusion in locating a room. We learned some Irish phrases to use during the big Rugby match. (”Bhí mí-ádh orthu”.)

April
Loved being in Carlow for the International Pan-Celtic Festival 10-15 April. Told Irish stories for families in the library, and got a rousing ‘mú–ú–ú–ú!’ from all the females for the tale of Maeve and the Bull of Cooley. Deirdre was asked a few questions by a TG4 journalist (no, it didn’t get screened, of course, but TG4! Best TV channel ever!). 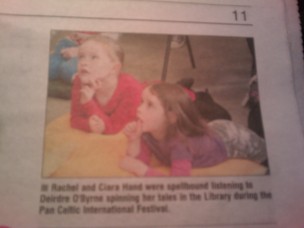 NISG presented a workshop on the dual language heritage in Irish literature, exploring writing by Seamus Heaney, Éilís Ní Dhuibhne, Nuala Ní Dhomhnaill and others. Interesting audience participation.
Storyteller Fran O’Boyle, who has done work with NISG in the past, was at the festival too. We were well impressed by his storytelling and illustrating sessions, and loved showing him some of Carlow’s historic raths, dolmens, castles, and holy wells. The pictures below show him at Brown’s Hill dolmen, Clonmore Castle and Haroldstown dolmen.

May
At the end of a talk on ‘6 Decades of British Fiction’ at Wingerworth Library, an audience member said she’d be interested in hearing a talk about 60 years of Irish fiction.  Anyone out there interested in hosting it?
Our Rang Gaeilge has new members  – Fáilte.

June
NISG held a double Bloomsday celebration on Saturday 16 June this year. In the morning, we were in the beautiful setting of Bromley House Library, for a reading from the work of James Joyce. Brian and Deirdre read selected extracts, in 1904 costume.  www.bromleyhouse.org
Click here for Bromley House newsletter.
Positive response: “We had a lot of good feedback from members saying what a pleasant and interesting event it was! Bromley House Library”.
* *
In the afternoon of 16 June, we participated in Nottingham Libraries’ Cultural Olympiad: various local drama groups performed at Central Library at Angel Row. We were so ‘hot’ that the fire alarm went off! When we were allowed back in, we read selections from the work of Joyce. We then went to Sherwood Arts Festival and to Broadway to show off our costumes.

July
4th July: Gave a talk on Colm Tóibín, arguably Ireland’s greatest living writer, for Birmingham Irish Heritage Group. Lots of interesting comments from the audience, and as always, it was a very enjoyable event. Anne Scott, the organiser, sent this feedback: “We all thoroughly enjoyed the evening. I thought the rapport between you and the audience was one of the best we have had”.
We held a workshop on ‘1000 Years of Irish Poetry’ at Southwell Poetry Festival on 6 July. Favourite comment was from the woman who said she’d expected it to be dry and boring, but was pleasantly surprised, and wants to come to more Irish events. Met a nice man called Robert in Broadway who also said how much he’d enjoyed it.

September
Pat Murphy gave a very well-received talk on playwright Seán Ó Casey to Birmingham Irish Heritage Group on 5 Sept. We have now established very good links with Birmingham Irish and look forward to further visits in the future.
Sat 29 Sept: We ran a Lá Gaeilge (Irish language day) at Nottingham Irish Centre. Christy Evans from Coláiste na nGael joined us to run advanced Irish classes and NISG members Pat and Deirdre ran the beginners’ group. We had Irish language films, bi-lingual Irish storytelling from Fran O’Boyle, and music from Gone to the Dogs in the evening. It was a successful and enjoyable event. Douglas from Irish World took these photos for the paper.

You can see them on our facebook page ‘Nottingham Irish Studies Group’.
October
‘Reading the Irish Diaspora’: a very enjoyable event at Red Tent (now Duffy’s Bar) in Leicester, 6 Oct. Storytelling, music and song on the theme of Irish emigration. There was even a bit of dancing. Thanks to Lynda Callaghan and Jackie Duffy for organising the event.

We’ve moved our Irish language group to King William IV pub in Sneinton on alternative Thursday nights. There’s traditional Irish music later the same night.
Pat and Deirdre attended the Federation of Irish Societies AGM at Leeds Irish Centre 13 Oct. It was a good opportunity for networking, and meeting people previously encountered online. FIS is an umbrella group for Irish community organisations. We were particularly pleased to meet our friends Sheila and Kevin from Mansfield Irish Assocation, and to make the acquaintance of organisers from all over the country, including Sheffield, Crawley, Luton and Coventry. We’re hoping to get involved in FIS’s Cuimhne project, dealing with dementia in the Irish community.

November – Our Tales of the Tiger on Sat 17 Nov at Loughborough University went well. Pat Murphy spoke on the betrayal of the ideals of 1916 during the Celtic Tiger years; Alan Bairner told us about Rugby Union in Ireland (there’s a case to be made for the game of Rugby having been invented in Ireland!) and Catherine Rees ran a workshop on Irish drama. The day ended with a documentary and discussion on the North of Ireland. Full programme here.

December – I read an Eavan Boland poem at Five Leaves’ Christmas party, celebrating the publication of Maps and other ventures.

NISG collaborated with Mansfield and Dukeries Irish Association at an Irish culture night at Boothy’s Club on Fri 14 Dec.

Acushla played excellent folk and Irish traditional music, interspersed with some short readings from Brian and Deirdre of  Nottingham Irish Studies Group. We read some Joyce (Christmas dinner from Portrait and Gretta’s story from ‘The Dead’), and Irish poems including Kavanagh’s ‘A Christmas Childhood’, and other seasonal  pieces. Many thanks to Nigel Scott of Mansfield and Dukeries Irish Association for organising the event and inviting us. We had trouble getting there in the floods of rain, but it was worth it.

If you’d like a workshop or talk on Irish history or literature, or some other aspect of Irish life, get in touch: info@nottinghamisg.org.uk;
Facebook.com/East Midlands Irish Forum; Facebook.com/ Nottingham Irish Studies Group.
Fees negotiable. Irish Storyteller available for children’s parties and events.

This site uses Akismet to reduce spam. Learn how your comment data is processed.